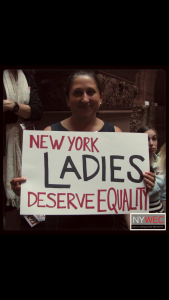 Carolyn Ehrlich is currently a Political Strategist for the Reproductive Freedom Initiative at the American Civil Liberties Union (ACLU).  Prior to the ACLU, Carolyn served as the Assistant Vice President of Government Relations at Family Planning Advocates of New York State  & Planned Parenthood Advocates of New York . She has worked on candidate and ballot initiative campaigns since 2004, rising from paid canvasser to organizer, field director and eventually campaign manager; has coordinated a variety of regional and statewide reproductive justice campaigns and has provided on the ground leadership and support for the Mississippi ballot initiative in 2011 and the Virginia gubernatorial election in 2013.  Carolyn holds a Masters in Social Work from the University at Albany, State University of New York.