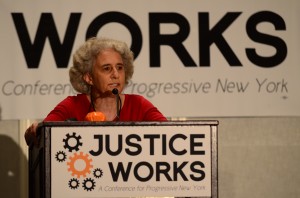 Karen Scharff is the Executive Director of Citizen Action of New York, a statewide grassroots organization that empowers New Yorkers to fight for social, economic and racial justice, with a focus on policy change at the state level.Citizen Action of New York, the New York affiliate of USAction, has seven regional chapters and affiliates across the state and mobilizes its 20,000 members on local, state and national issues and elections. Citizen Action has played a leading role in successful campaigns to expand health coverage in New York State, pass the Affordable Care Act nationally, increase state education funding, end prison-based gerrymandering, enact fairer taxes on the wealthy, protect Social Security and numerous other campaigns for justice.Citizen Action’s most recent campaign is Fair Elections for NY – a campaign to pass comprehensive campaign finance reform with public funding of elections at its core. Citizen Action has also played an active role in electing progressive candidates to local, state and national office, and was a founding member of the Working Families Party.Karen serves as a co-chair of the Working Families Party. Ms. Scharff received a bachelor’s degree from Harvard University, and then worked as a community organizer in South Carolina and Connecticut prior to joining the staff of Citizen Action of New York in 1983. She has been Co-Director and then Executive  Director of Citizen Action of New York since 1984.